Pamban Island is the closest point to Sri Lanka in the Indian mainland. It is “connected” by Adam’s Bridge, a chain of shoals some 40km long and reputed to never be more than 1m deep.    It was at Rameswaram on Pamban Island that Lord Ram worshipped Siva on his return from Lanka where he had killed the demon king, Ravanna.    Most tourists who come here are Hindus as this is one of 4 modern holy sites which Hindus should visit in their lifetime in order to be released from the cycle of birth and death.

But there is much to interest the non-Hindu as well.

The island is joined to the mainland by the Annai Indira Gandhi Road Bridge from which magnificent views of the 105-year old Pamban Rail Bridge can be enjoyed. The bridge is more than 2km long with 140 spans and opens to allow the passage of boats and ferries. It was built in the early 20th century.  It is currently closed for some much-needed repairs.

At the eastern end of the bridge is a small but lively fishing settlement which is a haven from Brahminy Kites seeking easy pickings from the drying fish.

As well as its significance as pilgrimage site, the Ramanatha temple in Rameswaram is famous for its magnificent colonnaded Eastern corridor, 220m long.   It is also great for the bustle of pilgrims queuing up to be doused in a water from the 22 tanks and water sources (thirthas) in the temple.   Before you enter the temple take a walk along the shore where you will see the devotees taking their preliminary dip in the Bay of Bengal.

While in Rameswaram, a visit to Dhanushkodi is a must.   This is the remains of a once thriving town where the train connected with the ferry to Sri Lanka.  Tragically, the whole town was destroyed by a cyclone in 1964 which also washed away a train with 115 passengers.  The town was then abandoned but the ghostly remnants remain including houses, church and railway station.

Until recently, Dhanushkodi could only be reached by jeep across the sand but a road has now been built and the ruins are gradually being hidden by stands selling tourist goods.  One assumes that there must be a market for these among the coachloads of Indian tourists.  The drive out from Rameswaram is still worthwhile as the narrow strip of land offers views of the sandbanks with excellent birdlife including flamingos. 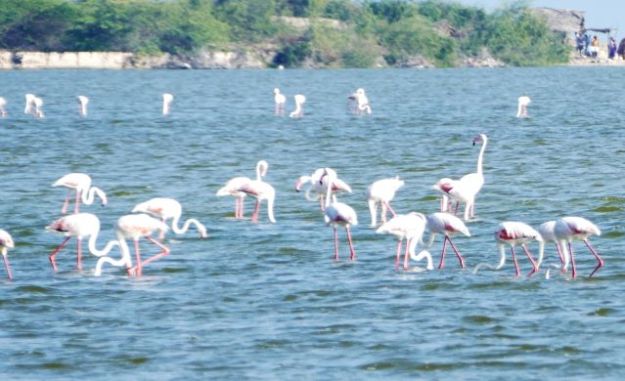 The road takes you all the way to the most easterly point where some still defy the ban on swimming to take yet another dip in the Bay of Bengal.

My morning walk takes me around “the lake”.    Nestling at the foot of the Palani Hills, Kamarajar Sagar Dam provides part of the water supply for the nearby town of Dindigul.    During the rainy season which is normally November and December the lake is filled from two rivers descending from the hills.    In good years the lake fills and the dam overflows.  That hasn’t happened for a while.

The lake is a paradise for birds, some resident including egrets, cormorants and spot-billed ducks and some occasional visitors including several varieties of stork the most striking of which is the painted stork.     Most mornings I can expect to see kingfishers, Indian rollers, bee-eaters, drongos, bulbuls, parakeets but these are just a few of the species around.   Then there are always the flocks of peacocks and hens, India’s national bird.

At the southern end of the lake a grove of large native trees is the home to a colony of fruit bats.   These wonderful animals are becoming increasingly rare as the large trees they need for roosting disappear but the valley is fortunate to host a large colony.    In the months of July and August they can be seen in their hundreds in the evening sky heading to the mango and orange groves in the hills.

As well as enjoying the birds, a morning walk is also a good way to see how people live here.   Fishermen in coracles are catching the fish with which the lake has been stocked.  As the lake dried up almost completely last year it had to be restocked and fishing is still limited to a couple of days a week.

Coracles – no fishing this morning

A small fish market materialises next to the pump-house when the catch is landed.    On the west side of the lake are paddy fields which are irrigated by an ancient canal system which takes water from the rivers before they enter the lake.   Last year there was no paddy because of drought but this year there seems to have been a good crop.   Towards the north end as the valley narrows there are large coconut and mango plantations.

Every day goatherds bring their flocks to graze on whatever grass they can find. Each afternoon Thomas can be seen with his herd of buffalo.  This year he says grazing is difficult and his milk yield is greatly reduced.

It wouldn’t be South India if there wasn’t a religious aspect as well.   Around the lake there are a number of sacred groves where local people find spiritual sustenance in nature.  It could be a simple shrine at the foot of a large tree or a small unspoilt area of forest where there are small temples which have been there for many years.

A shrine underneath an old tree

The largest is now a full-scale temple to Sadayandi who seems to be a local incarnation of Siva.   This is now the location for many festivities including weddings and ceremonies to celebrate a child’s first haircut at the age of about 2 years old.

Every morning there is something different to enjoy.   For example the bird in the picture below is, I think, a bit lost – a reef egret some 100 miles from a reef. 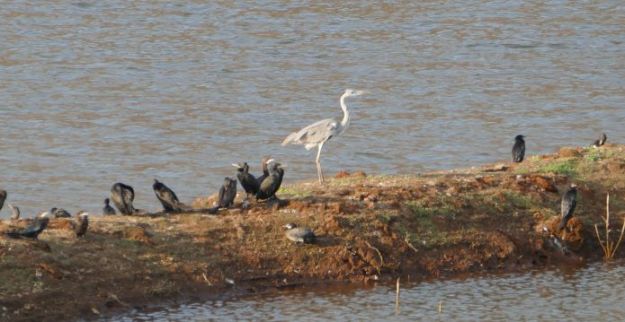