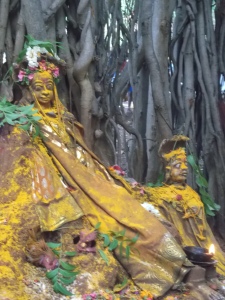 Yesterday, 14 August, was the festival of Adi. This is a big event at our local temple when hundreds of pilgrims come to pay their respects to the local holy man, Sadayandi.

As far as we can determine, the legend is that Sadayandi was a sadhu who lived in a cave on hillside. He was noted as an astrologer and the local people came to consult him when they needed advice. After his death the cave where he lived became a temple with a sacred grove and a number of subsidiary shrines at the foot of the hill, nestling under ancient trees.

Throughout the year local families come to mark important rites of passage such as the first haircut of a child when they are about two and a half years old. On these occasions a goat will be sacrificed and friends and neighbours will be invited to join the celebrations and eat the goat as well as to make a contribution of money towards the child’s welfare. Phil has written about this in an earlier blog.
On this special festival day the whole area was transformed with all the shrines decorated with new clothes, a battalion of priests in saffron lunghis on hand to assist with pujas, and around the shrines all the necessities for a successful puja were being prepared. Garlands were being made, trays of candles, banana, coconut and beedi to satisfy the god were available and the barbers were on hand to provide the full head shave for all those who wanted to go all the way and sacrifice their beauty to the gods. 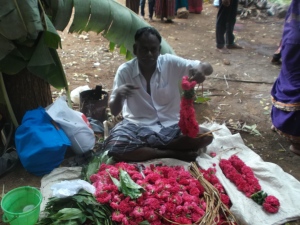 Food was being prepared for all who came. This is provided free by the temple authorities and the local people and we had duly made our financial contribution a few days earlier.
Although it was still early, there was already a column of people wending their way up the hillside to the cave.

Religious duty done, the fun can begin. More stalls were getting ready to satisfy other needs – fried snacks without which no Indian day out is complete, a plethora of plastic toys for the children and even a wonderful wooden wheel (not quite the London Eye) to give the children rides.

The police and emergency services were on hand too but, in the early morning calm their duties were not arduous and they were enjoying their breakfast. 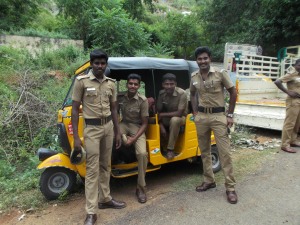 The mediaeval celebration of a Saint’s day in a local church must have felt much the same.

The Sadayandi temple is located near the Kamaraj Lake about 5 km from the village of Athoor, near the town of Dindigul.