The Indian peninsula, south of the great alluvial plains of the Ganges, is immensely old. It started off as part of the ancient continent of Gondwanaland, which broke into several pieces – modern-day Australia, southern Africa, Madagascar, southern India – with a few crumbs left over which formed the granitic group of the Seychelles. What is now southern India moved north-eastwards and bashed into the Eurasian plate, throwing up the Himalayas – a process which is still continuing. As it moved it passed over a volcanic hotspot (where Reunion Island is today), and lava intruded into the older rocks.

In the north-western part of the Deccan these lava flows are some 2km thick, and today cover an area of around 500,000 square kilometres. These are the Deccan Traps, from the Icelandic word for step, “trappa”, referring to the stepped nature of the terrain as the lava is well-layered.

I must admit this was news to me. The Deccan was a dry hostile environment which for centuries discouraged people of the north from moving southwards. Alexander the Great came to northern India at the same time that Arab sea-farers were starting to trade out of ports close to Kochi and Mahabalipuram, but there was little or no connection between north and south within India. I had always thought that the Deccan was in effect a trap for unwary travellers! 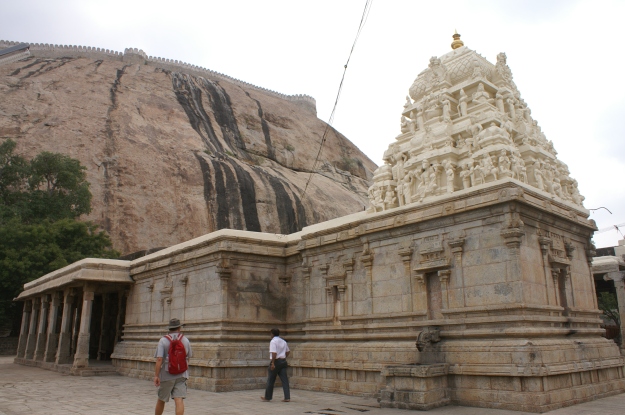 The photograph is of the temple and fort at Namakkal.

The western edge of the peninsula, it is thought, was lifted up vertically by great stresses as the peninsula moved north-eastwards, but the underlying rocks are still granitic in type. These are now the western Ghats – the word “ghat”, of course, means a flight of steps normally leading down into a river, and it has been transferred to steep mountains rising from the plains, often in a series of steps. The ghats themselves rise to over 8000 feet (2500 metres) and are deeply dissected by river valleys. The hills plunge down into a rich red soil and the rock reappears now and again at intervals as isolated mountains and hills: some are unbroken monoliths as at Namakkal, Dindigul and Trichy; some are piles of weathered rocks heaped on top of each other to substantial heights, as at Gingee. Nearer the coast, the land gets drier and less fertile and you find salt pans and prawn hatcheries, for example, and the rise and fall of sea-levels has produced a number of layers of differing sediments.

One of the most curious links between geology and history is the rock known as Charnockite. In 1892, a geologist who was studying the tombstone of an East India Company administrator in St John’s churchyard, Calcutta, recognised that this was a hitherto undescribed type of granitic rock. The tombstone was traced to a quarry on St Thomas Mount in Chennai, but the rock is found in other parts of south India – particularly the Nilgiris – and in Sri Lanka, where it forms most of the central mountains. Why someone went to the trouble 200 years earlier to ship this rock over 1000 miles to make a tombstone, we shall never know. But it still marks the grave of Job Charnock, who died in 1692 and for over 300 years has been regarded as the “founder” of Calcutta.

Visitors to Tamil Nadu, therefore, are presented with an ancient and fascinating landscape which may also remind them of southern Africa and Australia, in form, colour and vegetation.