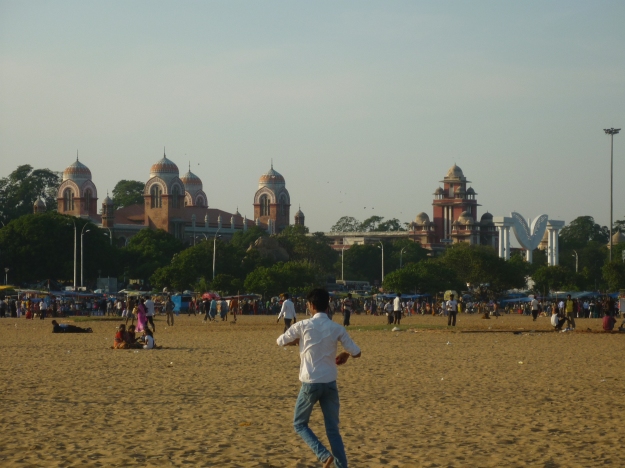 The Marina Beach in Chennai is described as the largest urban or city beach in India, and the second largest in the world (but without mentioning which is the largest). It stretches between the mouths of the two rivers crossing the city, the Cooum to the north and the Adyar to the south. Over 100 years ago the then Governor, Grant Duff, decided that the stretch behind the beach would be laid out as a promenade, and subsequent harbour work has encouraged the sand to accumulate. The beach is now 300 to 400 metres wide from road to sea, and about 13 km long.

Sunday evening is the time to visit, when an estimated 50,000 Chennaites come down to the sea to escape the heat and the mosquitoes. The beach is full of vendors – food, drinks and souvenirs; you can go horse-riding, there are informal cricket pitches everywhere; small fairground rides are set out. People come with banana leaf offerings and make puja at the water’s edge, some daring ones splash around in the waves. Although the sun is setting behind the city, the pink afterglow is picked up by the clouds and carried right round to the eastern horizon.

Everyone is in a good mood, and this is the best way to meet people of all descriptions on neutral territory, as it were. European visitors are rare, and it is advisable to make sure your camera is fully charged since everyone wants a photo with you, of you and of themselves. 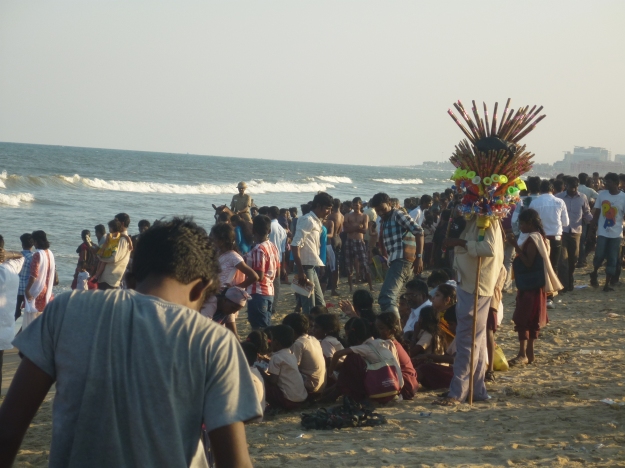 Swimming is not advisable. There is a strong undertow and treacherous sideways currents. The occasional rogue wave takes people unawares, and there are frequent accidents. It still makes our blood curdle when we think of the tsunami in 2004. This hit the beach on Boxing Day Sunday, at 8.40 in the morning. The waves crossed the entire width of the sand, then the parking area, then the promenade, then the road, and into the grounds of the police headquarters. But the majority of the morning walkers had finished and gone home; and few cricketers had yet arrived. 200 people were swept away, which is a tragedy, but imagine the disaster had the wave struck that evening.