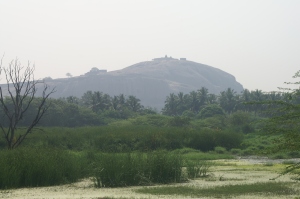 Yesterday I drove the 25km into Dindigul, our nearest town, and also the nearest reliable ATM. Dindigul is not on the tourist routes: if you go direct from Trichy to Madurai you can now do this on the new highway without coming anywhere near Dindigul; if you come down from Bangalore and Salem to the south, Dindigul has a fine new bypass and all you will get is a sight of the rock. The picture is a poor view taken at the wrong time of day – when the sun is setting the rock goes deep red, like Ayres Rock. But more on the rock in a later blog.

I want to try to give an impression of our town. First of all, some facts. Data from the 2011 Census of India are available on-line, and from these we find that Dindigul city has a population of around 210,000 people. It is the municipal headquarters of Dindigul District, which contains around 2.2 million people, some 3% of the population of Tamil Nadu. [Tamil Nadu had 72.1 million people in 2011]. Various websites say that Dindigul is famous for locks and tanneries; for cheroots; for fruit and vegetables; and Dindigul biriyani is a famous dish all over the south.

But it is a confusing town to get around. The roads don’t quite seem to lead to where you would expect: the Palani road, for example, ends in a T-junction and you then struggle through a narrow lane which finally gets to the New Palani road. The Karur road is not now the main way to Karur. I navigate on key shops: the road of the metal shelf makers leads onto the road of the safe-makers and thence to the station; the road past the massage-oil shop leads onto the street with the coffee shop and then the supermarket; the road with the big petrol bunk has the best fruit and veg shop; and so on.

The town grew at the base of the rock which was fortified by the Nayakas from Madurai during the 17th century and then passed to the Mysore army in 1745 and was governed by Hyder Ali from 1755. The British took control of it in 1799 after the battle with Tipu Sultan at Srirangapatnam. Round the base of the rock are a few remnants of the British era including a sadly neglected cemetery. But the value of the town now is that it is very well situated for trade, sitting in a gap between an isolated mountain called Sirumalai and the Palani Hills, which mark the easternmost end of the Western Ghats. [Sirumalai means “little hill” in Tamil, which is an understatement. I estimate it measures 20km by 15km, and rises to around 1800 metres].

As you might expect, there are few historic buildings left apart from religious ones. People are focusing on trade, and there is no room for emotion. But nor is there any desire to wilfully knock down something which can still do a job, so the Sunday doctors operate their charitable clinics from temporary cabins inside an old warehouse, modern glass-and-concrete stores rise between brick and stone houses from the 1950s, and here and there are single-storey cottages from 100 years ago or earlier.

The fruits and vegetables are excellent. Some come down from Sirumalai and a lot from Kodaikanal, so there is a good variety of produce from hills and plains. Yesterday I bought my first mangos of the season which I had for breakfast this morning.